FTHo's Curator/Director Gareth Bell-Jones will be speaking about John Latham’s challenges to ideas of perceived knowledge at Publication Scaffold, a series of events, performances, installations and discussions during the opening weekend of 2019’s Dublin Art Book Fair. 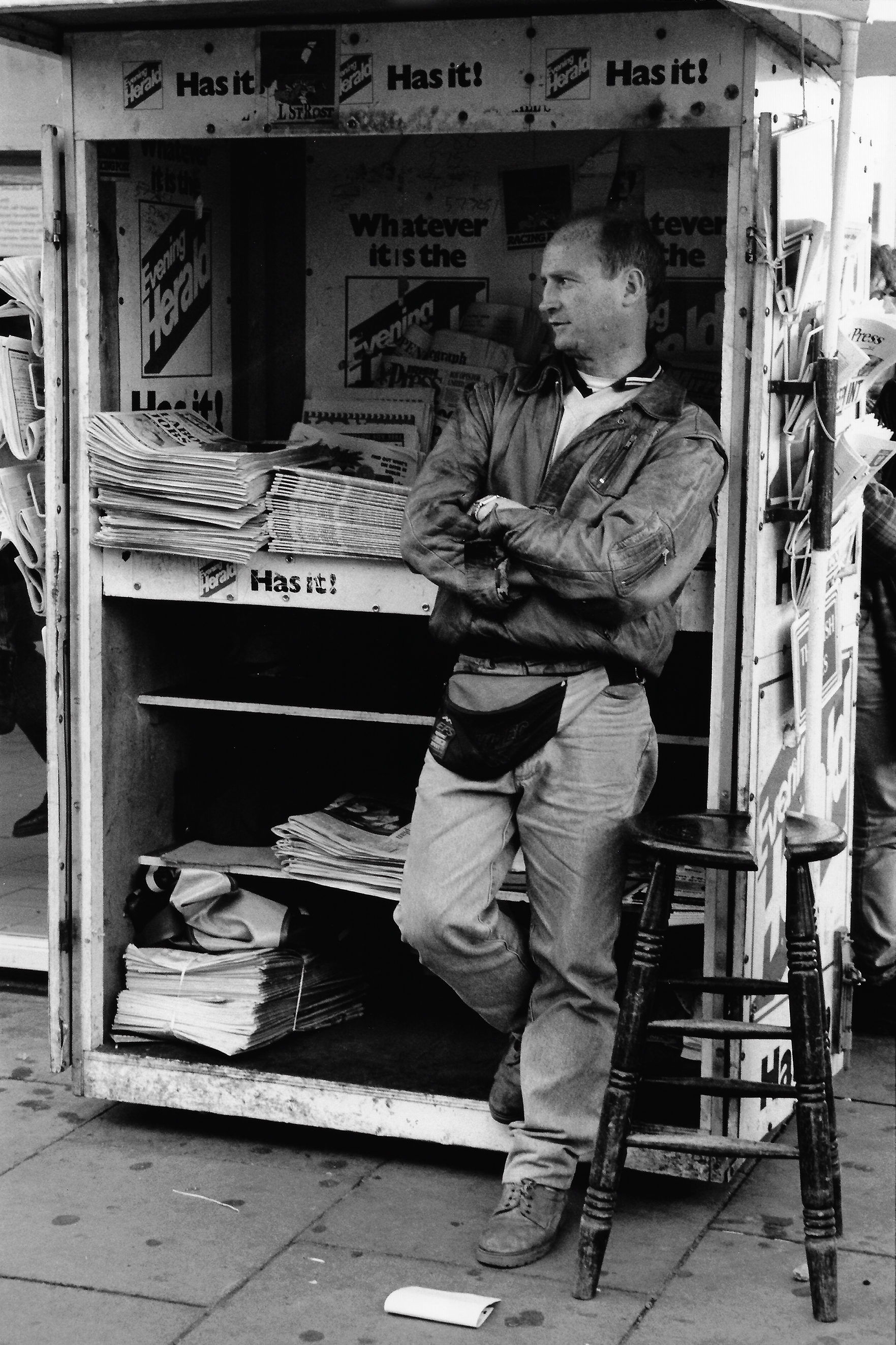 Publication Scaffold finds practical and metaphorical ways of envisaging the process of publishing. It points to books not solely as objects, but as conversation and encounter, as discursive notions surrounding their own existence. Publication Scaffold plans to go up, down and around Temple Bar Gallery + Studios, to be encountered in surprising places and times throughout the fair’s schedule. It is fitted and bolted together both by hand and by thought, making operative spaces for wide-ranging and digressive territories. Pages turn, words are uttered, platforms for communal discovery emerge. Juxtaposition and serendipity are fundamental to these investigations, leading to new ways of thinking about the portable, malleable exhibition format as a publication itself.

Highlights include a launch of John Hutchinson’s new publication, and Ruth Clinton and Niamh Moriarty debut a performance. Emanuele De Donno reveals the inner workings of Viaindustriae, an expansive publishing and research initiative based in Foligno, Italy, while John Carson’s sprawling psychogeographic artwork, Evening Echoes, presented at TBG+S back in 1995, is reprised.

Gareth Bell-Jones speaks of artist John Latham’s challenges to ideas of perceived knowledge. Vukašin Nedeljkovic urgently interrogates the social conditions and experiences of asylum seeker accommodation in Ireland. Renata Pekowska showcases her continuing research on the role and history of artists’ books in Ireland, while Wayne Daly entangles himself with the legacies of visionary architect Cedric Price. Dan Starling skypes in from Vancouver his adaption of Charlie and the Chocolate Factory, and as Adam Chodzko’s world revolves at pace, surprising relationships and connections occur through his affirmative actions. Gene Beery’s self-published artist books are pithy critiques of art’s institutions and social mores, while Ramon Kassam navigates the neoliberal cultural infrastructures that have appeared in Ireland. Cesare Pietrousti exposes the inherent commodification in distribution networks and trans-active exchange. Barry Flanagan’s concrete poetry will be performed at Publication Scaffold, as Elisabetta Benassi recontextualises the archives of 20th century news into sculptures, film, books and slides. Juan Sandoval explores the concept of land, extracting soil from industrial sites and places of political and social conflict to make ceramic objects.

Publication Scaffold at Dublin Art Book Fair has been made possible by an Arts Council Arts Grant, along with support from the Artist Residency Programme at the Irish Museum of Modern Art, Dublin; Askeaton Contemporary Arts, Limerick, and Mahler & Lewitt Studios, Spoleto.

A podcast of Publication Scaffold is available, presented by artist Michael Holly and outlining the exhibition with recordings from the weekends events and performances including Jo Melvin's reading of Barry Flanagan's '(O for orange U for you: poem for the lips)'. For full details of the participants and contributors please click here

Gene Beery is an American painter and photographer whose career has spanned over five decades. He uses social criticism and satirical humour in his text paintings and self-published books, which are thought of as increasingly relevant today. He lives and works in Sutter Creek, California and is now represented by Greenspon Gallery, New York. In the early 1960s, he worked security at MoMA in New York, where he recalls guarding his own painting in the collection.

Gareth Bell-Jones is a curator and writer based in London. He is director of Flat Time House, a gallery and archive in the former home of post-war conceptual artist John Latham. Bell-Jones has worked at the Royal College of Art, London, and as curator of Wysing Arts Centre, Cambridge where he regularly initiated residencies, exhibitions, retreats, events and publications as well as an annual music festival.

Elisabetta Benassi is an Italian conceptual artist who uses video, installation, sculpture and photography to critically examine contemporary identity and conditions of modernity. Her rigorous research practice uncovers aspects of history that may have been undermined by collective, cultural memory. She lives and works in Rome where she is represented by Magazzino d'Arte Moderna.

John Carson is a Northern Irish artist, arts educator and curator based in Pittsburgh. His work utilises various media, contexts and strategies, including live performances, installations, television and radio broadcasts and public art projects, to thoughtfully investigate the relationship between high and low culture, seeking to broaden contemporary art audiences. Over a long and varied career he has presented exhibitions at venues such as Douglas Hyde Gallery, Dublin; ICA, London; IKON, Birmingham and PS1, New York.

Ruth Clinton and Niamh Moriarty are collaborative artists living and working between Leitrim and Sligo. Throughout their practice, they enact a dialogue between the romantic and pragmatic that exists both within the work and throughout the collaborative process. Recently, they have used performance, video and text, informed by detailed site-specific research, all to investigate Ireland’s complicated relationship with its colonial past.

Wayne Daly is a London-based Irish graphic designer. He is co-director of Daly & Lyon graphic design office and co-founder of Bedford Press, where he published books and e-books at the intersection of architecture, visual art, graphic design and theory. He has exhibited at international book fairs, contributed to journals worldwide and teaches at École cantonale d'art de Lausanne, Switzerland.

Barry Flanagan was a Welsh sculptor best known for his often monumental and fantastical bronze sculptures. Throughout his practice, he explored ontology, movement and the physicality of the various materials with which he worked. In 2006, the Irish Museum of Modern Art in Dublin held a major retrospective of his work, in association with Dublin City Art Gallery The Hugh Lane, which included ten large-scale bronzes installed along O'Connell Street and in Parnell Square. A major survey of his work is ongoing at the Ikon Gallery in Birmingham.

John Hutchinson is one of Ireland’s leading writers and curators of visual art. He was the director of the Douglas Hyde Gallery in Dublin for 25 years, striking an innovative balance between established and emerging; Irish, international and minority artists through his programming. His new book, Counter-cultures, communities and Indra’s Net was published in 2019 by ACA PUBLIC.

Ramon Kassam is a visual artist from Limerick who uses the medium of painting to reconnect with the concept of the artist as a creative subject. His recent work combines the theme of an artist’s workspace with formal and conceptual references to the autonomous reality of modernist abstraction. Kassam is represented by Green on Red, Dublin and writes essays and reviews of Irish painting and related subjects online at Green PAINTERLY.

John Latham was a pioneer of British conceptual art who worked through painting, sculpture, performance, assemblage, film, installation and writing. He was devoted to exploring complex ideas and questioning traditional notions in art, science and philosophy. In 2003, Latham declared his home a living sculpture, naming it Flat Time House after his theory of ‘Flat Time’. In this spirit, Flat Time House opened in 2008 as a gallery with a programme of exhibitions and events exploring the artist's practice, his theoretical ideas and their continued relevance.

Vukašin Nedeljkovic is a visual artist and researcher at Technological University Dublin’s Centre for Transcultural Research and Media Practice. He founded Asylum Archive in order to collaborate with asylum seekers, artists, academics, civil society activists and immigration lawyers, amongst others, to build an interactive online document that critically foregrounds accounts of exile, displacement, trauma and memory. Nedeljkovic was housed through direct provision between 2007-2009 while seeking asylum in Ireland and his doctoral research examines the inception of this system from 1999 and its continued effects today.

Renata Izabela Pękowska is an artist and researcher based in Dublin. She is an art and history panel member at Dublin City Gallery the Hugh Lane and the National Museum of Ireland, and worked at the National Irish Visual Arts Library for more than ten years. Pękowska’s educational research focuses on the potential of art and design education to promote lateral and independent thinking and personal growth, while her artistic practice focuses on the use of light in contemporary design and visual arts.

Cesare Pietroiusti is a conceptual artist based in Rome whose practice focuses on problematic and paradoxical moments hidden in common relationships and ordinary acts. In 1997 he published Non-functional Thoughts, a small book of approximately one hundred incongruous ideas that could be realised as art projects by anyone. Cesare works with the Oreste Project, who seek out free and operative spaces for developing ideas and projects, artworks and exhibitions.

Juan Esteban Sandoval is an artist, curator and director of the Cittadellarte Art Office at the Fondazione Pistoletto, Biella, Italy. As an artist, Sandoval uses objects, urban interventions and video to develop hybrid methods for interpreting diverse cultures. His current research analyses the history and relationship between the Colombian Amazonian region and western cultural development. He is also the co-founder of “el puente_lab” art collective in Medellín.

Dan Starling is a visual artist based in Vancouver who works with a variety of media including text, video, photography and drawing. Taking a popular subject or literary figure such as Lewis Carroll or Albert Camus as a starting point, his work intervenes, extrapolates and reconfigures conventional narrative structures in order to explore their latent possibilities.

Adam Chodzko is a British contemporary artist based in Kent, who presented a solo exhibition at the Hugh Lane Gallery in Dublin in 2007. Chodzko utilises a wide range of media, including video, installation, photography, publications, drawing, and performance to explore conscious and unconscious behaviour, social relations and collective imaginations. Exhibiting nationally and internationally since 1991, his work speculates how, through the visual, we might best connect with others.

Jo Melvin is a curator and writer, Reader in Fine Art at Chelsea College of Arts, London and director of the Barry Flanagan Estate. Her current exhibitions include Barry Flanagan retrospective at IKON Gallery, Birmingham, and Sean Dower’s PLUNK, BOUM, KRASH, ZZZT, at Laure Genillard Gallery, London. She is a guest critic with The Brooklyn Rail, New York.

Michele Horrigan is an artist and curator, and since 2006founder and curatorial director of Askeaton Contemporary Arts, facilitating exploratory artist residencies in County Limerick. She is editor and publisher of ACA Public, an independent press and is currently invited artist-in-residence at IMMA.

Sean Lynch is an artist now living in Dublin. He is 2019 Visiting Professor of Art at Carnegie Mellon University, Pittsburgh. In 2015, he represented Ireland at the Venice Biennale. He has presented solo exhibitions at Henry Moore Institute, Leeds; Douglas Hyde Gallery, Dublin; Modern Art Oxford, and Rose Art Museum, Boston.