A permanent display of John Latham's work at Flat Time House provides an introduction to his cosmological theory.

In the painting and sculpture for which he is best known, Latham's primary materials included glass, books, canvas and the spray gun. Developing alongside this concise visual language, from the mid-1950s onwards, was a cosmological theory, formulated through his art-making discoveries, that considered time and event to be more primary than the established means of understanding, based on space and matter. Termed Time-Base Theory (sometimes Flat Time Theory or Event Theory) it offers an ordering and unification of all events in the universe, including human actions, and allows an understanding of the special status of the artist in society.

Latham looked at the way in which human knowledge has become fragmented over time; split by divergent religions, ideologies and world-views. He identified the way in which the fields of science and art, despite emerging from a common root, have become separate and operate in isolation of one another: even within a field such as physics, there exist a large number of schisms and specialisations that further fragment our knowledge and understanding of the universe. John believed that this endless division would eventually lead to a kind of entropy and from that state, to a disintegration of society.

Science works on the assumption that space and object are primary and are the fundamental building blocks of the universe. Time-Base Theory, on the other hand, assumes that time and event are primary, with objects existing as traces of events. Latham believed that our understanding of everything could be unified through this theory, from the existence of the universe to the behaviour of human beings. "There is no phenomenon in existence which doesn't have time in it. But there's an awful lot which doesn't have space in it."

Latham believed that if a shift were to take place and his new cosmology were taken on board, in place of the existing world-view, then the divisions that existed within religion, science, the arts and all fields of knowledge would be unified and the Universe better understood.

Latham has been associated with several national and international artistic movements since he started showing work in the late 1940s. He is associated with the first phase of conceptual art of the 1960s, was an important contributor to the Destruction in Art Symposium of 1966, and was a founder member of the Artist Placement Group (1966-89). His work has been exhibited internationally, including recent solo exhibitions at Tate Britain (2005) and PS1, New York (2006) and has been included in numerous historic group shows and many important survey exhibitions of British Art since the 1960s including 'Live in Your Head' (Whitechapel Gallery, London, 2000), 'From Blast To Freeze' (Kunstmuseum Wolfsburg, Germany, 2003) and 'Art and the 60s: This was tomorrow' (Tate Britain, 2004). His work is held in collections worldwide, including Tate Collection and MoMA.

Latham talked about the house in terms of a living sculpture, and in his description, different parts of the house are given the attributes of a living organism.

The Face
The front of the house is known as the Face. The large blue and yellow book sculpture that penetrates the window was made in 2003, commissioned by Southwark Council. The title on the spine of the book reads 'HOW THE UNIVOICE IS STILL UNHEARD', referring to Latham's unifying theory.

The Mind
The art works in this room demonstrate Time-Base Theory, or Flat Time.

The Brain
This was the room where Latham corresponded and executed his writings on Time-Base Theory. It is the home of The John Latham Archive.

Beginning in the Brain and continuing around the house are sprayed stencil letters on the walls stating 'the shift'. They refer to the paradigm shift that would be required for the establishment to take on board the new cosmology presented by Time-Base Theory.

The Body Event
This is the area of the house where the sitting, lying, sleeping, eating and 'plumbing' take place.

The Hand
During the time he lived in this house, this was John Latham's studio. 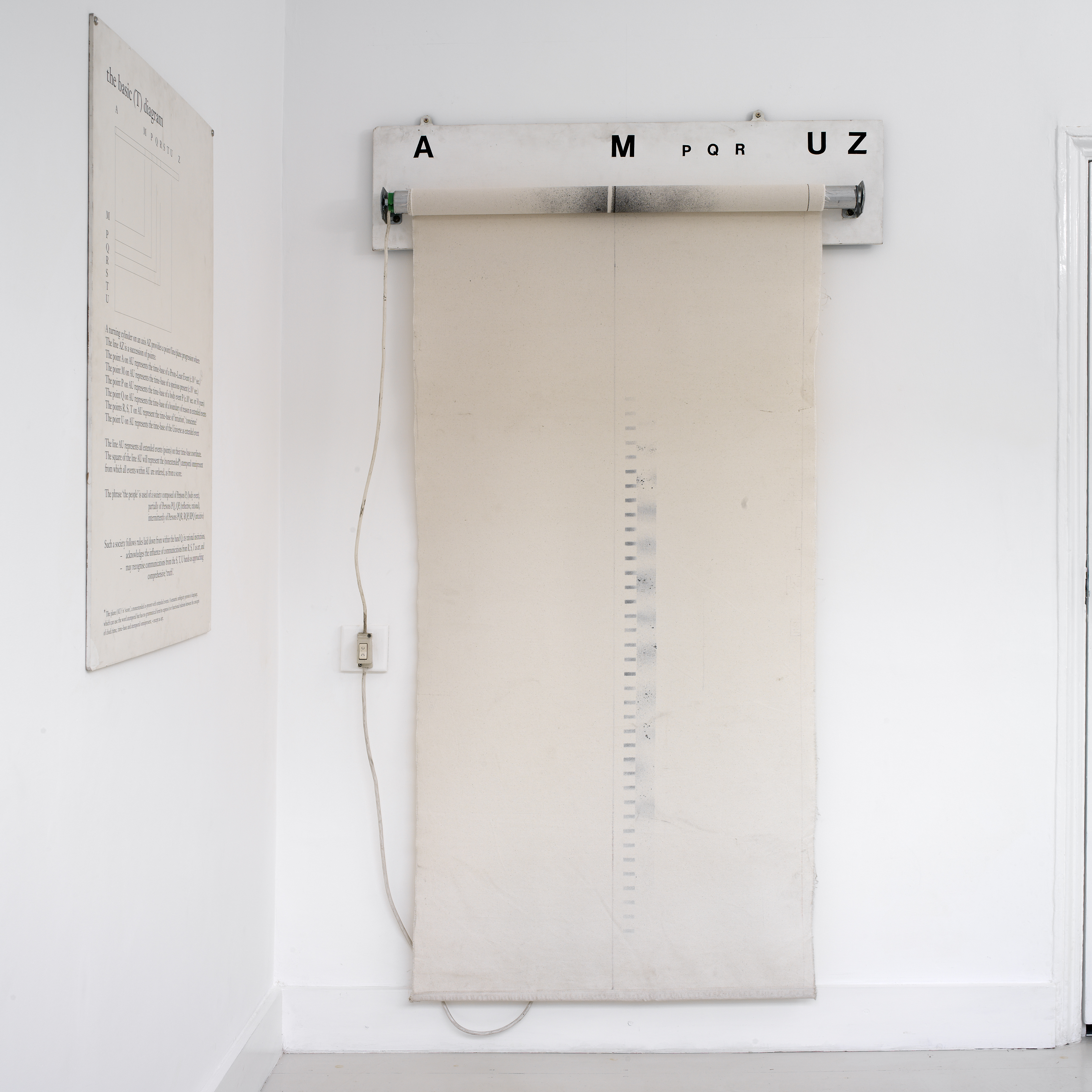 The long canvas is painted in strips and is wound round a turning barrel operated by an electric switch. As the barrel turns, more of the canvas is unrolled until the whole length is unfurled. The expanse of the rolled canvas represents an entire model of the universe understood timelessly like a musical score. The front side of the canvas is only momentarily visible to the viewer as it passes over the front of the cylinder before falling down behind, where its length is visible only in reverse. Most of the canvas remains obscured from our view most of the time, as it is either rolled up around the barrel or visible only from behind. Our understanding of the universe is therefore restricted to our lived experience of it, i.e. the narrow strip, briefly visible. The continuous change in what can be seen on this narrow strip represents the passing of time. The marks on the front of the canvas represent events occurring on different frequencies, or time-bases, as described by the letters along the top edge (see Basic T Diagram, above). The way the flat canvas is able to represent an entire Universe by it's length and breadth is the root of the term Flat Time.

The commonly supported understanding of the Universe is that it came into being from nothing as a result of the Big Bang, something like 13 billion years ago. In this work, the glass sheet represents the state zero, the nothing from which the Universe emerged, and the white sheet represents the least extension from that: an impulse to what Latham called the Least Event (towards point 'A' on the Time-Base Roller). 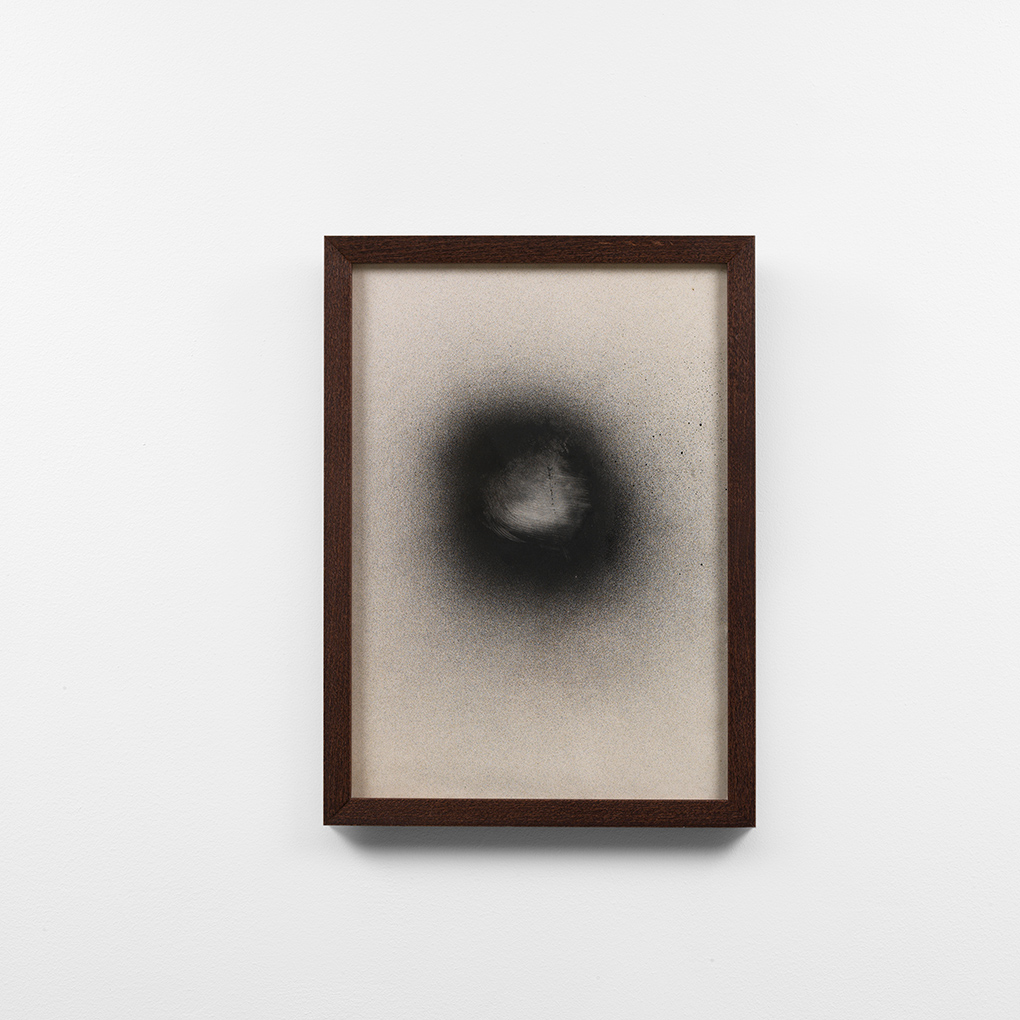 Latham began the series of One Second Drawings in 1970. They represent developments from the Least Event. The spray of ink left on the canvas or paper by the release of a spray gun was a useful way to visualising the Least Event. The spray of the ink also visually recalls a negative image of the cosmos. When a series of least events achieves a certain level of complexity and habit-formation, organisms begin to emerge. 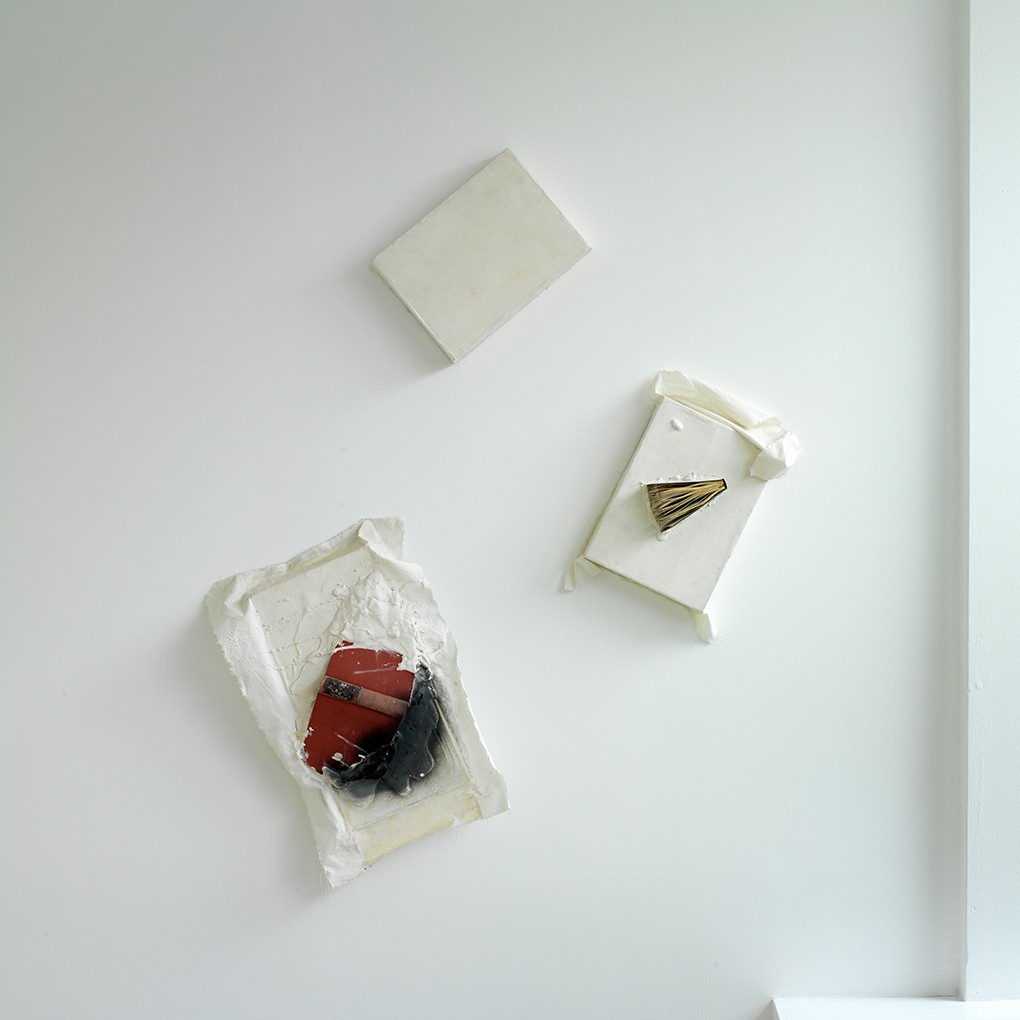 These three canvases refer back to a series of works Latham made between 1959-60 called the Observer Reliefs. In these works, and in the canvases here, the three elements stand in for three states of human existence. Latham used the three protagonists of the Dostoyevsky novel 'The Brothers Karamazov' (1880) to explain these states. The Mitya state, represented here by the most dense and cluttered book relief, is the instinctive being, whose behaviour is genetically determined and non-reflective, closest to an animal state. The Ivan state, again represented by a book relief, but this time more ordered and less obscured by the overlaid plaster and paint, represents the rational being, at once empowered and limited by their intellectual state and learnt or received knowledge. The most enlightened, Alyosha, state, represented here by the unmarked canvas, is the reflective/intuitive being who can encompass the characteristics of the other two but also has the ability to observe things as a whole and is capable of original thought. For Latham, this position in society was held by the artist, not necessarily the visual artist, and he used the term 'the Incidental Person' to describe it.

Latham made his first book relief in 1958 and continued to use books in his work until the end of his life. Like the spray gun, he took on the medium for its utility in explaining visually his ideas. Particularly, books contain language, and therefore knowledge. The way the books extrude from the canvas, glass or plaster within which Latham placed them represents the accumulation of human knowledge and experience over time; an emerging history which comes from a common point, our common origins, represented by the glass or canvas support.