A pedagogical theatre of unlearning and the limits of knowledge. Directed by Jakob Jakobsen. 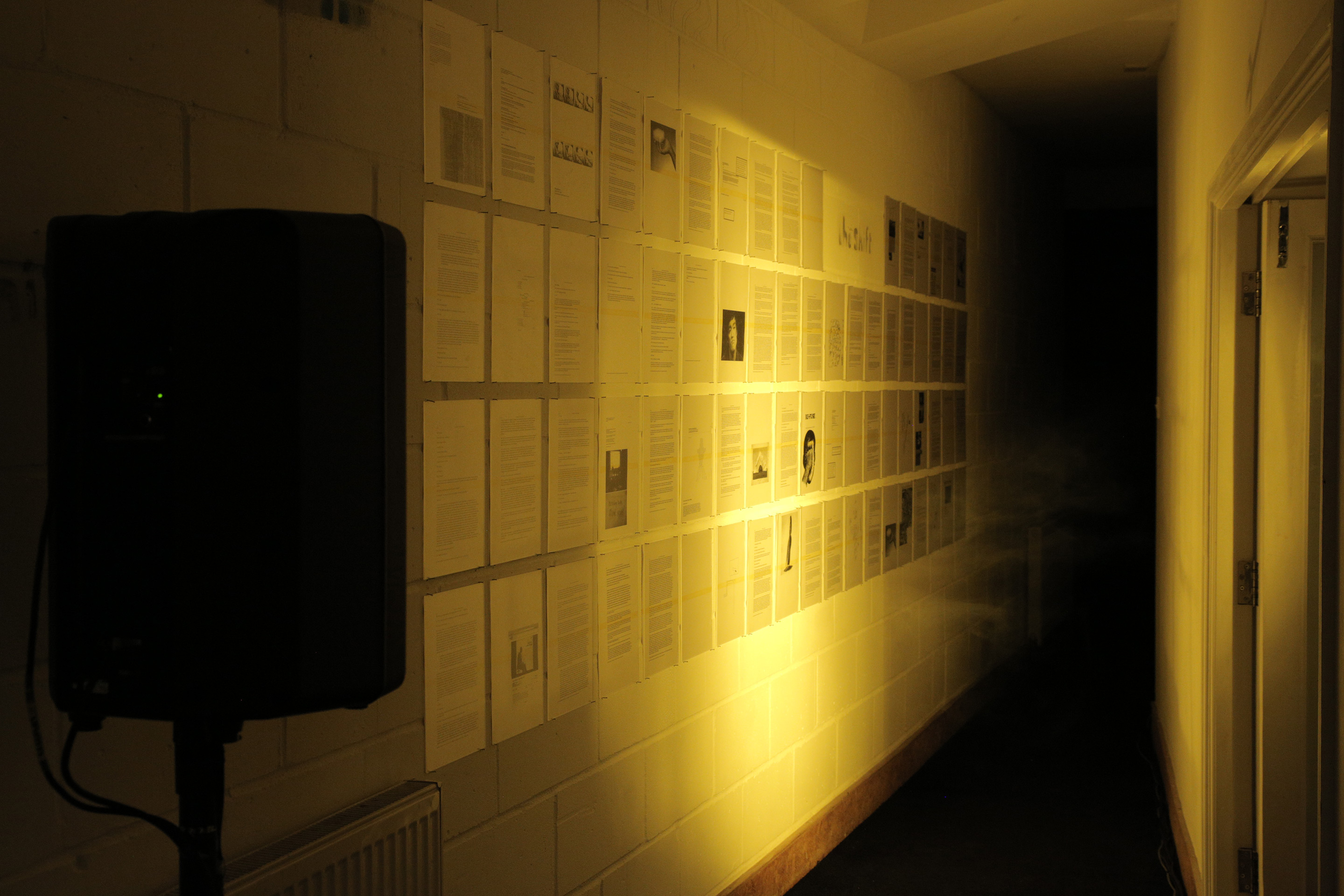 The exhibition Antiknow is a collective effort into unlearning and non-knowledge as critical strategies. This, in a time where institutional and frozen forms of knowledge and learning shaped by economic forces increasingly characterise education and society in general. The term 'Antiknow' was originally introduced by John Latham as his course title for the Antiuniversity of London in 1968. It is doubtful whether this course ever took place.

During his six-month residency at Flat Time House, starting in April 2013, visual artist Jakob Jakobsen engaged in elaborating possible meanings and consequences of the term Antiknow in the current context of so-called knowledge economy. Jakobsen set up the Antiknow Research Group, involving young artists from FTHo's MFI Graduate Group as well as a number of artists, writers and therapists with whom Jakob has collaborated for many years. This led to a series of meetings focusing on Antiknow in relation to work, politics, art and resistance. Marina Vishmidt, Maria Berrios, Howard Slater and John Cunningham were invited to reflect on specific themes within these fields of social practice. Also involved in the group were John Hill, Mary Vettise, Henrik Heinonen, Claire Louise Staunton, Katriona Beales, Mohammad Namazi, Danny Hayward, amongst other incidental participants.

This exhibition is one of the consequences of Antiknow and involves experiments into drama for non-actors, unskilled music and free drawing. The exhibition uses FTHo as a ready-made stage, using as a point of departure the anthropomorphic scheme that John Latham proposed for the building, where each room is dedicated to a specific part of the body: The Mind, The Brain, The Body Event (Plumbing), and the Hand. In the space, a mechanical theatre has been developed. The various themes investigated by the Antiknow Research Group are presented as a drama (or anti-drama) between sets of loud speakers and synchronised lighting. The scripts have been produced collectively using transcriptions of the Antiknow Research Group meetings. The improvised/unskilled music is produced together with Paul Abbott and Gabriel Humberstone.

During the exhibition a series of events and performances will take place where poets, writers, musicians, and performers have been invited to relate to the term Antiknow. 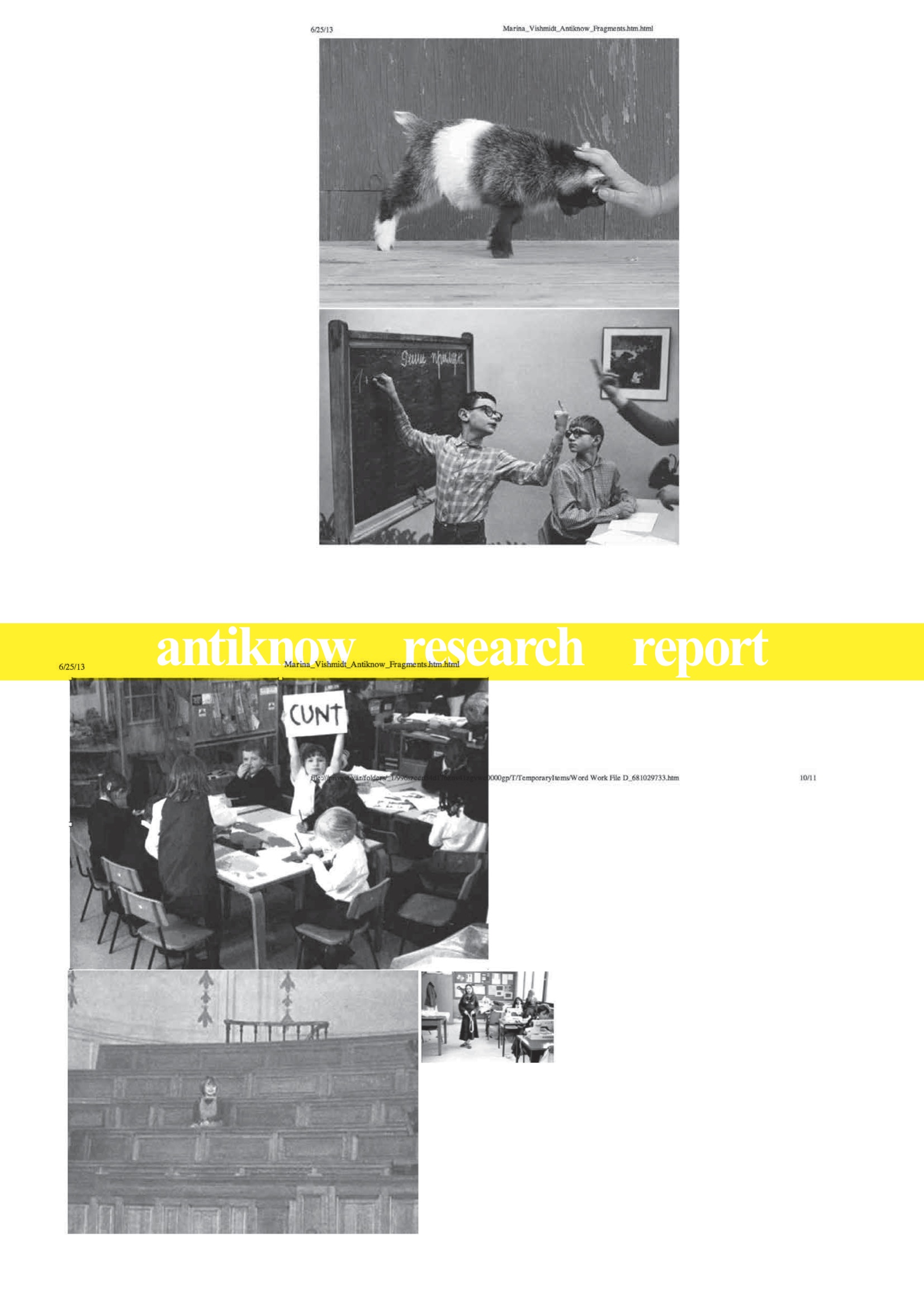 Emma Hedditch 'you cannot you'

Anthony Iles & Eve Lear 'This is the chariot, the ring, the circle... an infidel heteroglossia' 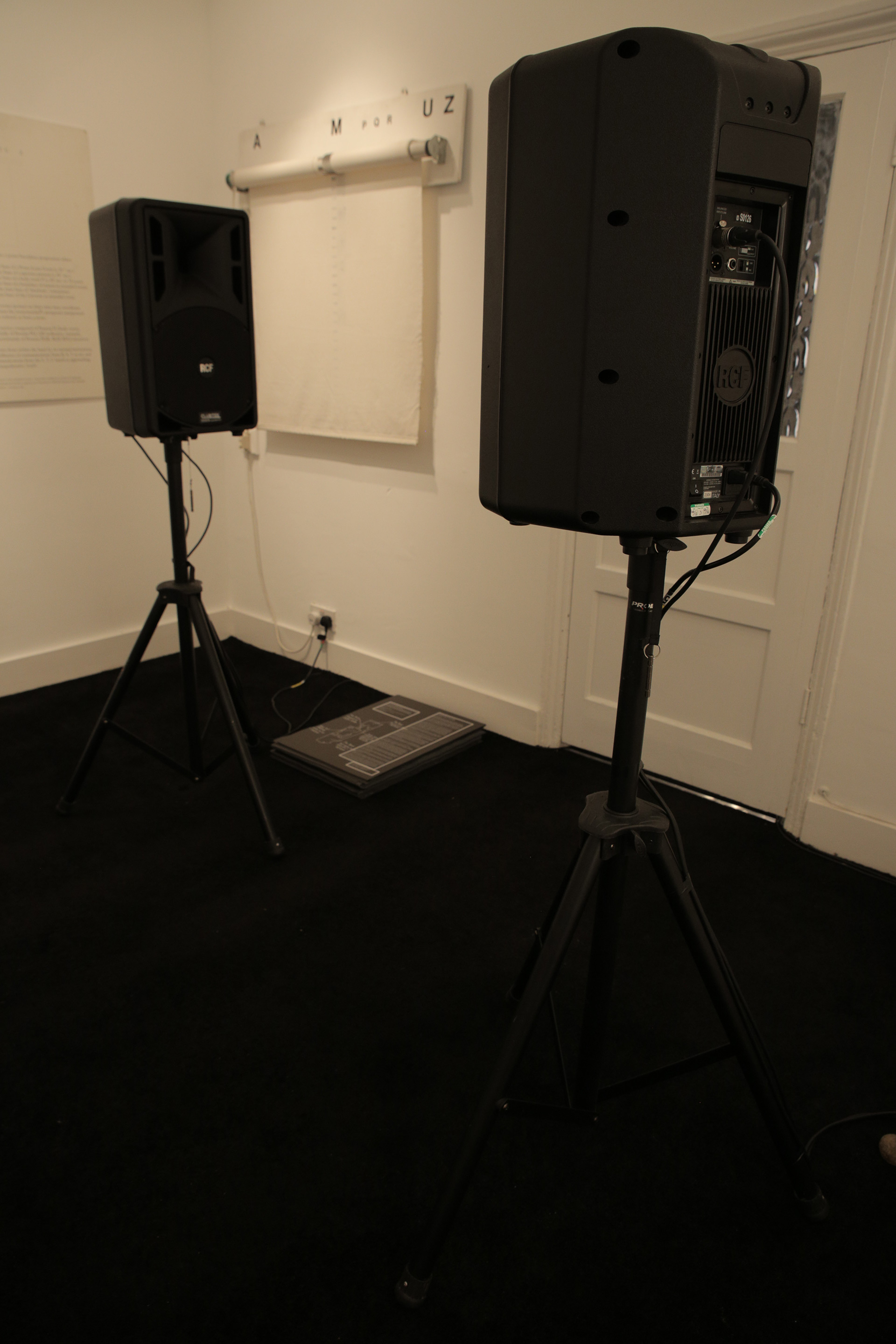 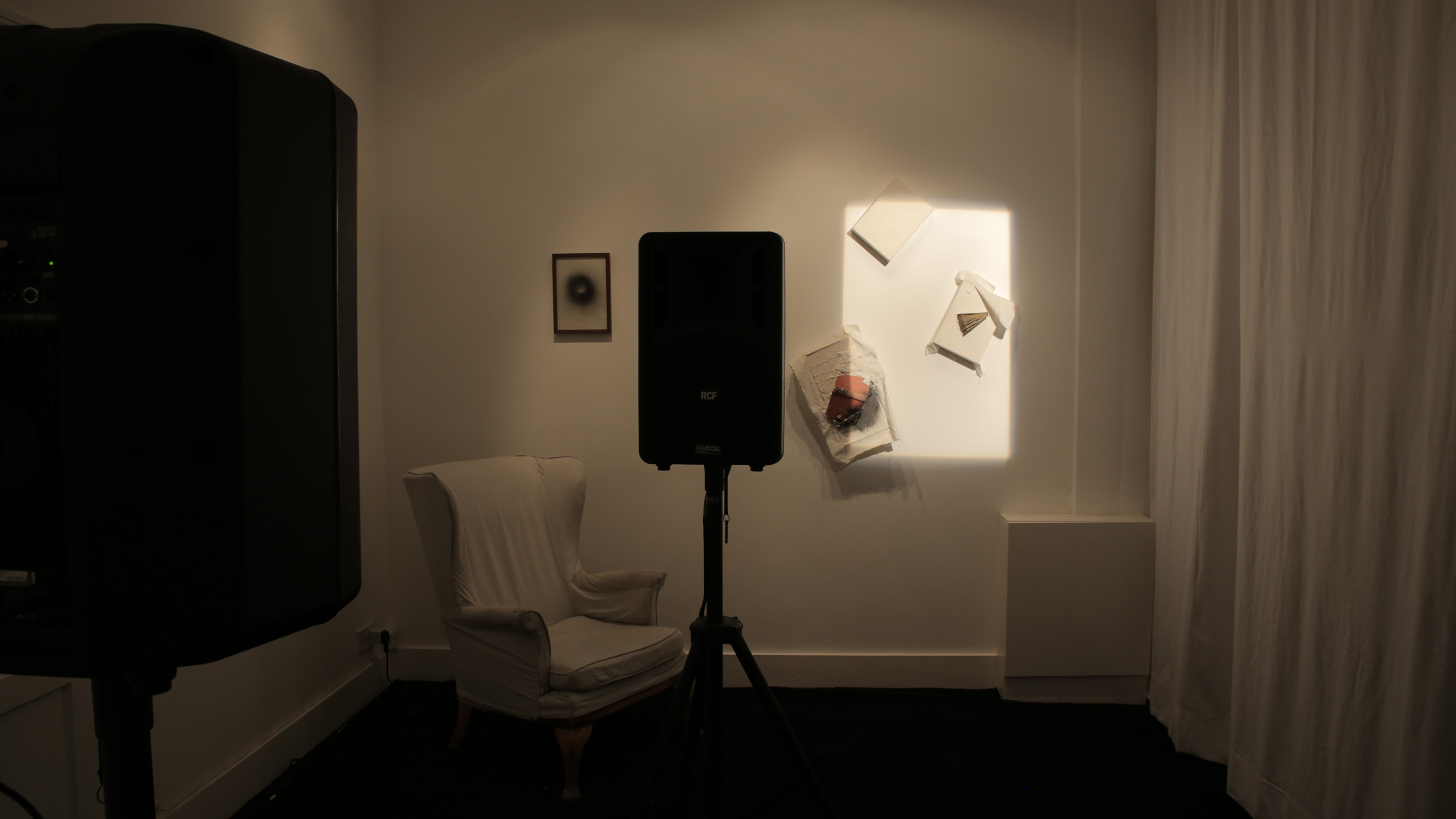 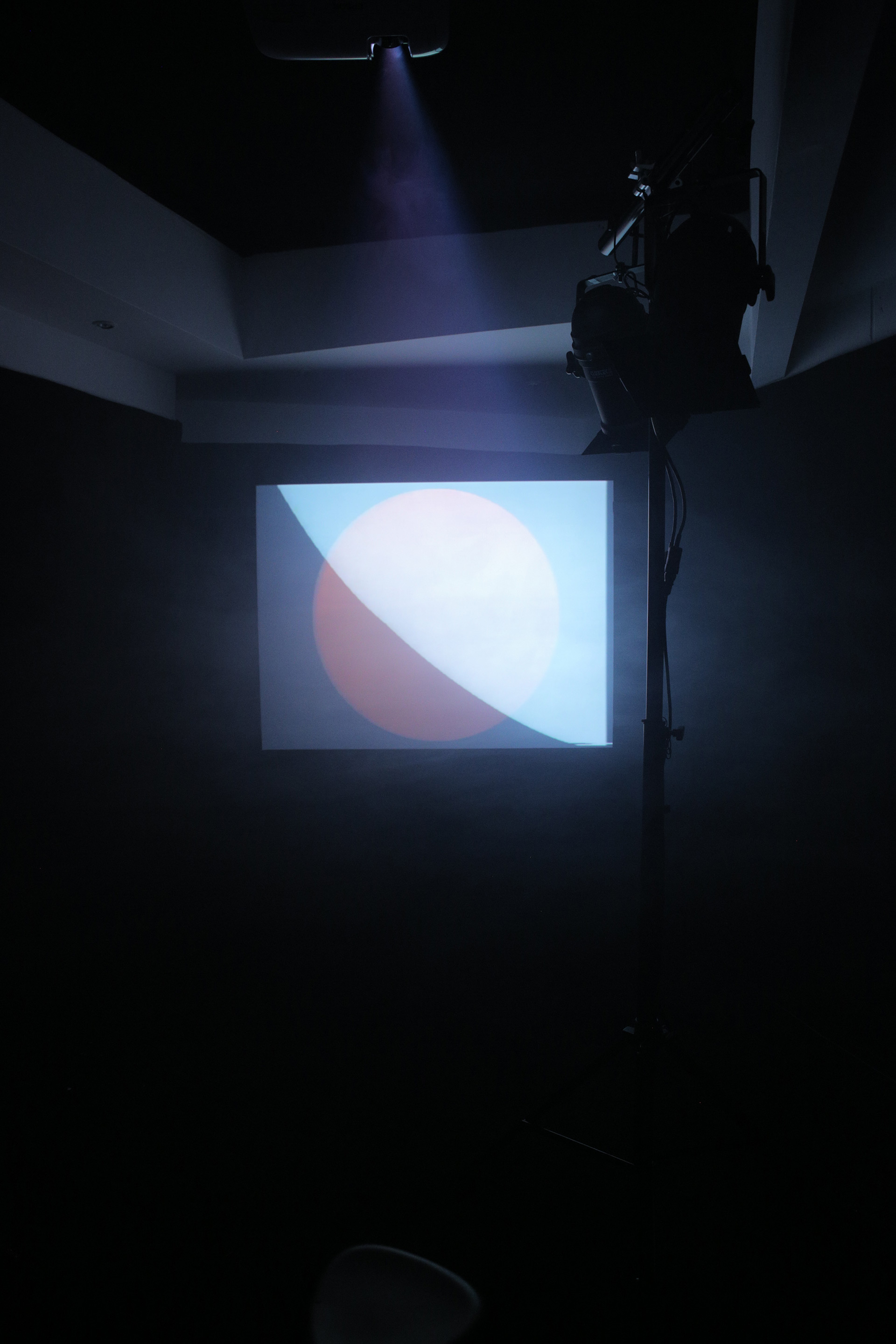 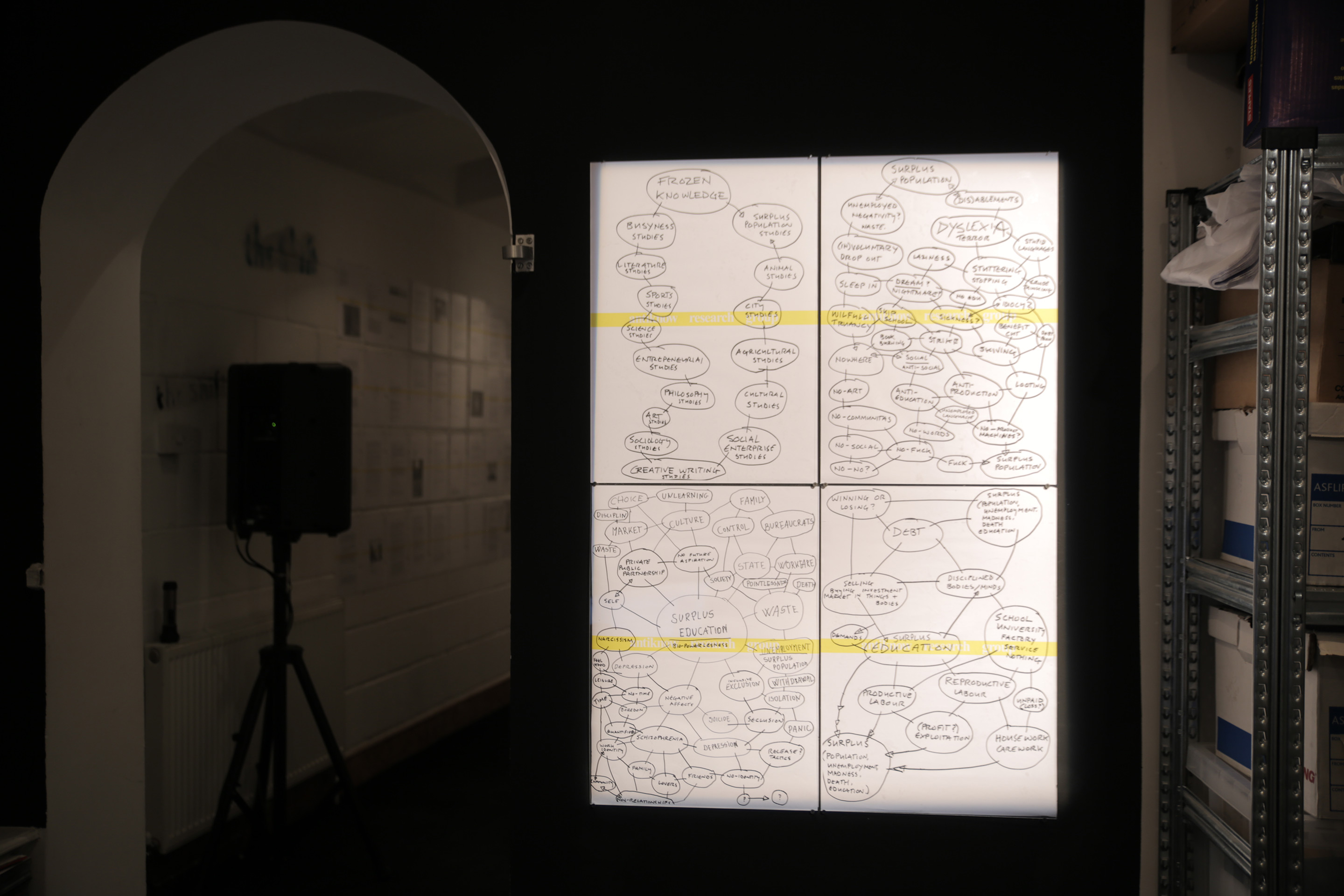 ANTIKNOW SCENE 1 The Brain. Diagrams of surplus education [A collection of diagrams on the wall]